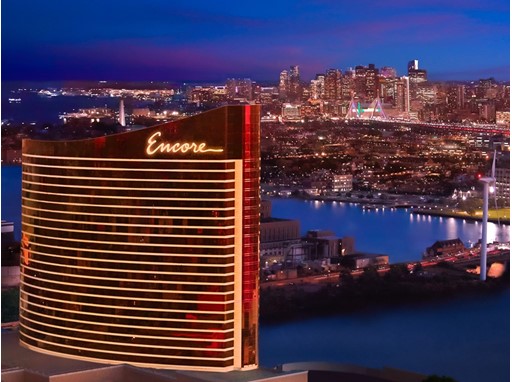 “Mystique” & “Memoire” To Be Flagship Dining & Luxury Nightclub
Destinations At $2.5 Billion Encore Boston Harbor Resort
EVERETT, MA (October 10, 2018) — Encore Boston Harbor added local flavor to its five-star, $2.5 billion global resort today, announcing that it has signed a lease with New England-based Big Night Entertainment Group to operate a 16,400-square-foot restaurant and lounge and 8,000-square-foot luxury nightclub at the resort.
Named for both its alluring design and waterfront location along the Mystic River, Mystique will be situated off the main esplanade of Encore Boston Harbor. The contemporary Asian-fusion menu will feature a spectacular array of artful sushi, traditional Asian delicacies and innovative new dishes. Memoire will overlook the Encore Boston Harbor gaming floor and be one of the most glamorous nighttime entertainment destinations in New England, complete with luxury VIP bottle areas.
“Encore Boston Harbor will offer some of the most high-quality, entertaining and enjoyable dining and nightlife experiences in the nation, making Mystique and Memoire perfect fits,” said Robert DeSalvio, President of Encore Boston Harbor. “Big Night Entertainment Group owns and operates several of the most popular and award-winning restaurants and luxury nightclubs in the region and is very well respected in this marketplace. They know how to amaze people in every way and will help mark Encore Boston Harbor as the premier dining and nightlife destination for all who visit, live or work in the region.”
Big Night Entertainment Group principals Randy Greenstein, Ed Kane and Joe Kane designed Mystique as an energetic open-kitchen restaurant and lounge that will be richly appointed with Asian-inspired artwork and adornments from across the globe. The restaurant will seat more than 530 guests in its main dining room and three private dining rooms, including a 94-seat lounge with wrap-around bar that will entertain guests at night with music and small-plate offerings.
Memoire will accommodate up to 600 guests in an exuberant setting of gold, leather, marble and hand-blown glass chandeliers direct from the flea markets of Paris. A mezzanine level overlooks the main floor and features VIP bars and private lounge areas.
“Mystique and Memoire are destined to be flagship destinations at Encore Boston Harbor,” said Principal Ed Kane of Big Night Entertainment Group. “We are thrilled to be able to deliver the premier, first-class experience that guests will expect at the resort.”
Mystique and Memoire will be two of the 13 dining, lounge and casual food offerings located in the three-million square foot Encore Boston Harbor Resort. The other restaurants currently announced to be at Encore Boston Harbor are Sinatra and Fratelli. Sinatra, the Forbes Travel Guide Four-Star Award-winning Italian restaurant that is owned and operated by Wynn Resorts and located at Encore in Las Vegas, will be located adjacent to Mystique. Fratelli, a casual-Italian restaurant, will be operated by Boston North End restauranteurs Frank DePasquale and Nick Varano.
ABOUT BIG NIGHT ENTERTAINMENT GROUP
Big Night Entertainment Group was founded in 2006 by veteran nightclub owners Ed Kane, Joe Kane and Randy Greenstein. Big Night Entertainment Group transforms hospitality with destinations that transcend the status quo, including: CBS Sporting Club, The Grand, Explorateur, Empire, Red Lantern, Scorpion Bar and Versus. Big Night Entertainment Group also owns and operates Scorpion Bar at Patriot Place in Foxboro, and Shrine, Red Lantern, High Rollers, Scorpion Bar and Guy Fieri’s Kitchen & Bar, in Connecticut. The company is consistently ranked as one of the “Top Places To Work” by The Boston Globe.